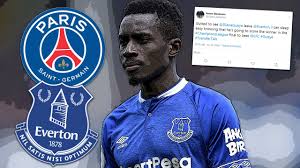 I don’t like the Transfer window. In fact, Everton fans seldom do.

It disobeys some basic rules of economics by placing a false deadline which amplifies the shortage of supply in relation to demand so ramping up the cost of buying a player and it stifles creative additions to a squad during key moments of the season.

And it also fools football fans into thinking that buying and selling during the window is about raiding the saving tins our grandparents used to use.

We tend towards simple sums – Lookman, Vlasic, Gueye, Antonee Robinson and a bonus-pay-day for Lukaku adds up to £65mn+ in sales receipts and we have only spent £22mn so that leaves £43mn in the Gwladys Street Tin Can used for storing cash.

What follows wont be news to many – but that is not how it works.

So, by way of explanation and taking each pint, sorry point, in turn.

Transfers, The rules of Economics and how Everton are affected.

If 5 clubs want 2 players, demand exceeds supply and so the price goes up.

But if you then add a deadline of August 8th, a false deadline further inflates that price. When one of the two players is sold, the buying clubs will up their offer for the one remaining.

Agents get rich, clubs get poorer, money leaves the game.

We can see that in action when a specialist position needs to be filled. Need a Centre Half who performs regularly in a top League and is Champions League ready? Then you are in a market where there is a shortage of supply. Take Harry Maguire: City want him, United want him and the price quoted is £80mn.

We at Everton also pay a price – Chelsea start looking at Kurt Zouma and think £30m, what I suspect had been talked about between the clubs, is very cheap.

‘We will wait until nearer deadline day and tell Everton that fee we discussed has gone up to £50mn’ becomes Chelsea’s position – that is if they want to sell at all considering they might get even more in January.

So we can see that as the transfer window gets ready to close, so Everton may have to pay to get Kurt.

And if we don’t get him, we have precious few days to play with so will be prepared to spend more than we would have hoped to in order to get someone…anyone, but fast.

How Savings Tins went out of Fashion.

It’s about the fee payment schedule – the dates a buying club pays for a player. And the Continental and South American systems are different from the way it was in England. There was an English rule which insisted clubs make one down payment then had to pay the rest within six months. When that was scrapped, the cost of a player went up.

The details of the schedule are seldom revealed but I know of one Everton transfer which was for a reported fee of £5.6mn. In fact it was £1mn for the first down payment and then four further payments over three years and four transfer windows.

Everton sold that player after just six months by getting the buying club to complete the payments. So we ‘lost’ just £1mn. Not good, but not as bad as it could have been.

The transfers reportedly going through at Everton might state a headline figure of £28mn rising to £36mn but the schedule might spread that over five years. It works in reverse, too. PSG might be paying a very large part of the £28mn for Gana Gueye up front whilst Leipzig might be paying for Lookman over two years rather than four.

The money does not go into a bank-version of a ‘savings tin’ – the business runs like an engine with top ups of oil and fuel constantly. Unless it is the car driven by me – I wouldn’t know where to out the oil in.

Where does this leave me a week or so before the end of the transfer window?

I have enough faith in those running the club to think that we are paying for players over the length of a contract so leaving a fair bit of manoeuvre for transfers.

Moise Kean might actually be costing us £10mn during this window, a new centre half might cost us a similar amount whilst Fabian Delph’s £8mn transfer might be the only cash deal we have closed on.

Meanwhile, I feel pretty confident that PSG front-loaded their payment for Idrissa so providing the down payments or fees for Moise Kean, Gomes and Delph.

This sounds good – but, remember, we have to pay eventually.

So our spending in January and next summer might already start considerably in deficit as we pay other instalments on the players we have recruited.

As ever, this is just fan speculation – but I have a hunch I am not far from correct.

And, whilst I still hate the transfer window, I am like every other Everton fan.

I will love it if we get what we want!